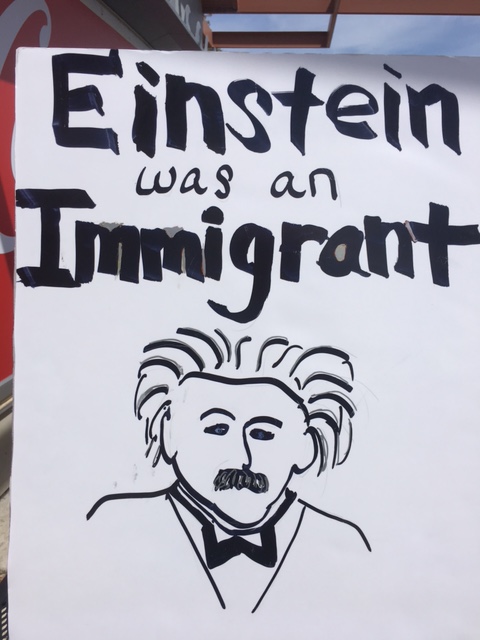 It was during the Science March in April that we proudly waved our “Einstein was an immigrant” sign. I could not stop thinking about how lucky we are that our country attracts brave and brilliant people who flock to us from around the world. But that could be changing under the Trump administration.

In January, Trump’s Travel/Muslim Ban, had an immediate chilling effect, contrary to our Constitution, and also contrary to the goal of making America great. Universities reported drops in foreign applications to University programs, with likely negative impacts on our economy and innovation. Students have choices about where to go in the world. After Trump announced his decision to pull out of the Paris Climate Agreement, President Emmanuel Marcon of France made a direct appeal for scientists to “consider France [their] second homeland”. Do we really want other countries to compete against us for, and win market share of, hard workers and innovators?

Meanwhile, we need immigrants to fill the numbers gap (or Generation X, Y and millennials) left behind by the Baby Boomers. This is not a time to turn away consumers and producers who boost our economy. We need them to make America great, we always have.

If you want to help immigrants, I recommend that you take a peak at the organizations listed in these Free Research Resources on Immigration presented recently at our local Library by two attorneys/librarians. Perhaps something in here may be useful to you or someone you know.

You are reading this blog, so you care about what your fellow Americans think. You are looking for answers and ways to help. You are the hope for our country.
Loading Comments...
Comment
×
<span>%d</span> bloggers like this: