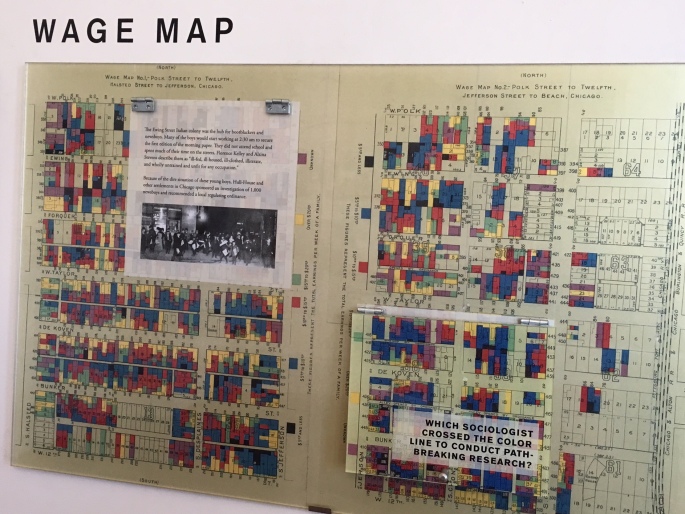 Today, in honor of International Women’s Day and a call for action following the Women’s March, a group of women (and my father and ten-year old son) took off for the day and toured Jane Addams Hull House Museum in Chicago.

I was humbled by the sheer breadth and depth of what Hull House accomplished in its many decades of service to our city and our nation. Also what women accomplished at a time when they did not yet have the right to vote. And most notably, how so much of what they accomplished persists today, to the benefit of all Americans, such as the eight-hour work day, child labor laws, occupational health and safety laws, the NAACP and ACLU.

A remarkable aspect of the settlement house was its commitment to serving the needs of the whole community, which meant dining halls, reading rooms, classes in citizenship and skill-building, child care for women who worked, new concepts like kindergarten, the first city playground for children, etc. This was not a single-issue settlement. It was about improving lives and community as a whole.

Also worth noting was both the neighborly and scientific approach taken by Hull House social workers. The map pictured above was developed by their study and intimate knowledge of the surrounding area and helped them understand the extreme poverty that existed. They deduced that families were making so little money weekly that children were forced to work, and work inordinate numbers of hours. Their studies and persistence led to child labor reforms we take for granted today.

Hull House workers settled in and served a neighborhood community, affording them a holistic view of a variety of community needs and solutions to those needs. This work is complex and issues are intertwined. Solving one problem might mean several solutions are simultaneously needed. Conversely, solving multiple needs can sometimes point to one powerful solution. Knowing the difference is critical, and it takes careful study and intimate knowledge and understanding of the needs. We are tempted today to treat Poverty, Child Care, Health Care, Equal Pay and Women’s Rights as separate issues. But they are inextricably intertwined. For example, equal pay for women will lift whole swathes of children out of poverty. Our modern-day politics either relies on statistics, or scoffs at them. Can we plant powerful people from both major parties on the frontlines–of poverty, rust belt, or immigrant communities–so they can get an up close and personal view?

Jane Addams’ example is an inspiration to us all. Interestingly, a woman from Finland joined part of our tour and she told us that she was very eager to visit the museum because in her country they are very aware of Jane Addams and her contributions to social work. In contrast, some women in our group who live in Chicagoland had never been to the museum and were not fully aware of her accomplishments, let alone her lessor known talented and dedicated female colleagues.

After learning more about Jane Addams and the residents at Hull House, who were mainly women of wealth and privilege intent on doing social good, I am more convinced than ever that women must take up the cause to heal and lead this nation. We are not fully empowered, so that helps us understand what it means to be a minority, and the good that is lost by marginalizing people. But meanwhile, women are not a minority, so that means we have the power of numbers, and many of us have the power of privilege and resources of being white and wealthy. We can and should step up to bridge the gap in our nation’s politics that would otherwise divide and weaken us all.

While it takes a village to raise a child, it may very well take a woman to save a village.

One thought on “It Takes a Woman. To Save a Village.”

You are reading this blog, so you care about what your fellow Americans think. You are looking for answers and ways to help. You are the hope for our country.
%d bloggers like this: