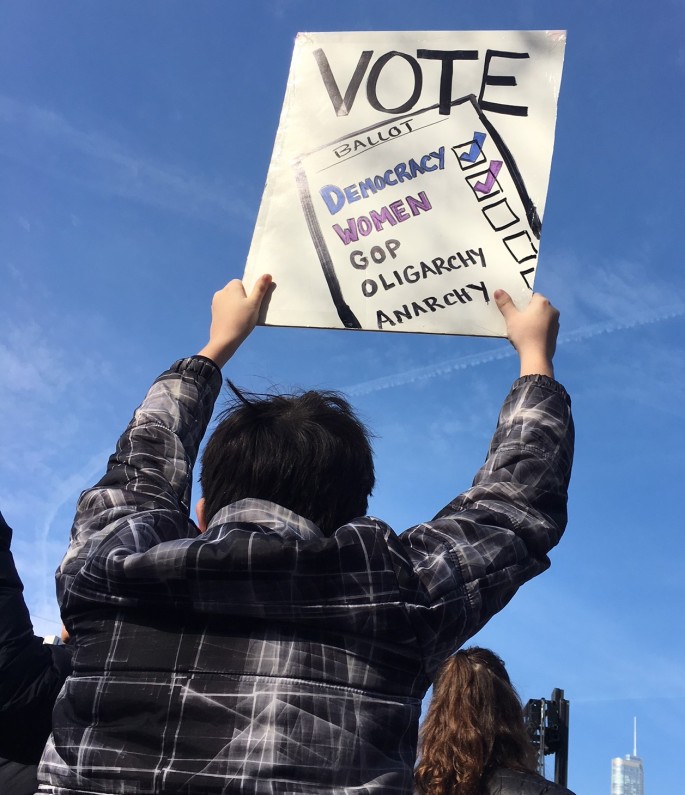 How was the Women’s March today? Depends on who you ask.

“Big!” Says my sixteen year old son. “Lots and lots of people.” Considering he is over six feet tall I suppose he had a good view of the crowd and the pink hats. He also was not at the Women’s March last year and so his biggest march was Earth Day with roughly 45,000 people. Today’s crowd was more like 300,000.

“Beautiful!” said the police commander when my friend asked him how it went. Peaceful and pleasant almost to a fault. Right before the march an organizer said, “Remember to be respectful of each other and public property.” And we were.

“Historic”, said our friend who also was impressed that it marks the anniversary of the birth of a Movement.

“Sober and mature” I thought, compared to last year’s marches which swelled beyond expectations. Last year in D.C. everything felt electric as people rushed with outrage and urgency to defend Americans and the nation’s ideals.  Now both their heads and their hearts are in the game. People know better how to proceed, how to pace themselves, how to win the long game to restore this country.

I saw ‘Dan Biss for Governor” signs. Meanwhile, JB Pritzker wound his way through the crowd near us , accessible to folks for chat and pics. Lisa Madigan gave one of the most inspiring and focused speeches. Basically she said,  “1. You can do anything (you already do, like build businesses, teach, volunteer), 2. You are powerful, 3. We are more powerful together. 4. Get out there to vote and run for office.” Powerful message we can think on, and act on!

You are reading this blog, so you care about what your fellow Americans think. You are looking for answers and ways to help. You are the hope for our country.
%d bloggers like this: